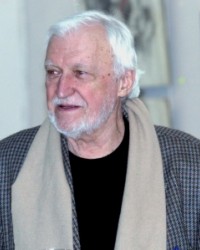 He graduated from the Academy of Arts in Sofia, having specialised in illustration. He has worked as art editor in children's magazines and later on as art director at the publishing house of the Union of Bulgarian Artists. From 1982 he is an associate professor and from 1985 - a professor in illustration at the Academy of Arts, Sofia. Prof. B. Stoev works in the field of the graphic art and the illustration. He has taken part in many graphic-art exhibitions in Bulgaria and abroad: Rome, Vienna, Madrid, Paris, Washington, Tokyo, Sao Paolo, Frehen, Frederikstadt, Lugano, Lubljana, Maastricht etc.; as well as in the Biannales of the illustrations in Bratislava, Barcelona, Brno, Belgrade, in the Bologna and Leipzig Book Fairs.

Borislav Stoev - On the Horse