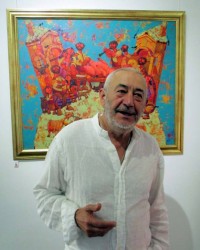 Gancho Petkov Karabadjakov was graduated in 1972 from the art high school in Kazanluk, Bulgaria. Graduated from the Art Academy "Nikolay Pavlovich" in 1979 under Professor Hristo Nejkov, subject "illustration and art design of books".

Since 1981 he participates in all regional and national exhibitions of fine art. Parallel with the art life of the Union of Bulgarian artists, he works in the sphere of monumental arts in Yambol region, as he realized frescos and paintings in many public buildings. In his being as an artist he tries to have his own original face and style.

In all variety of styles, conceptions and directions of the modern Bulgarian art he takes his own "niche", which the art critics defined as a "neo iconography" (Kiril Krustev). In all his work he strives for "building a bridge" in the period between post-Byzantine art, church painting and iconography. He defines his art as figurative-realistic in the spirit of the eternal Bulgarian traditions. Clear and understandable common composition, clear and readable detail - something so typical for Bulgarian art, which makes it understandable and close to most of the people, who have sense for the beauty.

In 1982 he became a member of the Union of Bulgarian artists - section "Fine art". He presented his art in more than 50 self-dependent exhibitions in Bulgaria and many other countries. Wall paintings, which he realized, are figural compositions, more often on historical theme, in which he tried with stylistic and local colors to impress the power of Bulgarian country, culture and traditions.