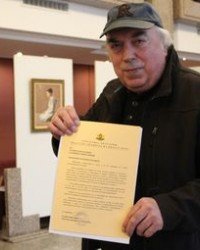 He was born on 8 August 1950 in the village of Malchika, Pleven district. He graduated from the Art Academy in Sofia, specializing in Painting under Prof. Benko Balkanski in 1975.

Since 1976 he has participated in dozens of General art exhibitions in the country as well as in regional exhibitions of Ruse artists. Since 1979 he has been a member of the UBA.

1981 in the gallery of the Union of Bulgarian Artists at 6 Ruski Blvd., Sofia.

1986 exhibition in the city of Riga, Latvia, in the temple "Peter"

2005 exhibition at the ARUID Gallery - Rousse

2010 - Exhibition in the Profitable Building -Ruse, on the occasion of the International Festival "March Music Days"

2013 exhibition at the Vazrazhdane Gallery, Plovdiv

2018 Exhibition at the Vazrazhdane Gallery, Plovdiv

2019 exhibition in the Profitable Building, Rousse within the "Love and Wine" Festival

Award of the Ministry of Culture "St. СВ. Cyril and Methodius "from the 9th International Biennale of Small Forms Pleven 2018

UBA Award for Painting at the Clavissimo Exhibition, 2019

Donations and ordered works for churches

The artist donated to the Catholic Church in his native village of Malchika / Pleven district /, St. Anne, a copy of Leonardo da Vinci's painting "The Madonna from the Cave". At the request of the Catholic Church, he painted a full-length portrait of Bishop Evgeni Bosilkov, declared blessed, first for the church in a village and then for the Rousse Catholic Church "St. Paul of the Cross". The Orthodox Church in the village of Malchika donates a copy of an icon to her patron saint St. Archangel Michael, painted on an oil canvas.

On the order of the BOC and the patriarch, the artist made a portrait of Patriarch Neofit in the robes of the Metropolitan of Rousse, which was near to him.

In 2017 Nikolay Karadzhov was nominated and selected for the Vladimir Dimitrov Master Award.