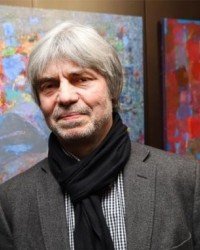 In 1973 he graduated from the Secondary Art School of Fine Arts in Sofia. In 1981 he graduated in Painting at the National Academy of Arts in the class of Professor Svetlin Rusev. Since the same year he has been a member of the Union of Bulgarian Artists and has started to participate in youth competitions, zonal competitions and general art exhibitions.

He participates in the international paintings in Smolyan, Zemen, Melno (Poland) and in the Biennale of Humor and Satire in Gabrovo, whose 13th edition in 1997, Yanakiev was awarded a special prize. He has won many other awards, including a Grand Prize from the Spring Spring Exhibition of the town of Haskovo in 1983 and a prize at the General Portrait Exhibition in Sofia in 1987.

After his paintings became owned by the Uffizi Gallery in Florence, the National Gallery of Fine Arts La Valletta, Malta, the Mimara Museum, Zagreb ... Nikolay Yanakiev continues with his success.

He became the first contemporary Bulgarian artist to sell his painting in one of the most prestigious auction houses "Christie's".

The auction took place on July 19th in London and brought great success for the Bulgarians. His painting "The studio" was sold at a price five times higher than originally announced.

In recent years, his general exhibitions with Vezhdi Rashidov in Thessaloniki and Barcelona have passed with great success and interest.

Nikolay Yanakiev - By the coast