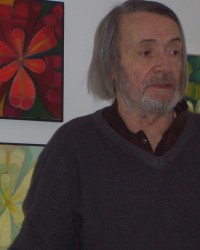 Thoma Trifonovski  was born in the village of Kastoria Drenichevo a family of Macedonian Bulgarians. According to his own accounts childhood memories were most vivid in his mind. 11 years during the Civil War Trifonovski is displayed outside Greece in the group of refugee children.

Late childhood spent in Czechoslovakia, where he found his parents through the Red Cross in Hungary, where he studied painting under Professor Endre Domanovski. In the early 60s the family settled in Bulgaria and ends Trifonovski decorative monumental painting at the Art Academy in 1966.

The artist lives and works in Pleven, Vratsa and Sofia.

Thoma Trifonovski  is one of the greatest masters in the field of female portrait, nude, still life.

Works of Thomas Trifonovski are owned by the Museum of Modern Art "Petit Palais" in Geneva, National Gallery of all museums in the country, in private collections at home and in Italy, Germany, Canada, Russia, France, Austria, Macedonia, Denmark, Cyprus.