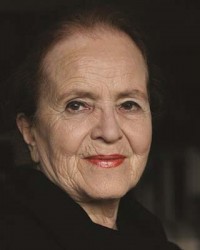 Dora Boneva is a Bulgarian painter born in April 11, 1936 in Gabrovo, Bulgaria, and living in Sofia, Bulgaria. She received a Mater's degree from the Academy of Fine Arts in Sofia. She studied painting under the guidance of the academician Dechko Uzunov. She took part in many national art exhibitions and in numerous Bulgarian art presentations in foreign countries. She has won awards from the Union of Bulgarian Artists, from the government of Sofia, from the Institut Culturel de Solenzara in Paris, a silver medal from the French Academy of Fine Arts. Since 1981 she has been a corresponding member of the European Academy of Sciences, Art, and Literature, with head office in Paris. In 1989, 1990 and 1993, Boneva took part in the Autumn Salon in Paris. She was selected as artist-in-residence by the Griffis Art center in New London, CT, USA in 1994-1995.