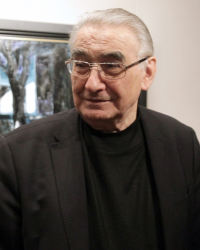 Svetlin Rusev (born 1933 in Pleven, Bulgaria) is a famous artist and one of the greatest Bulgarian collectors of creations of art. He is very famous for the Svetlin Rusev Donative Exhibition, a permanent art exhibition in Pleven, including over 400 works of Bulgarian and foreign art donated by him.

The Svetlin Rusev Donative Exhibition is a permanent art exhibition in Pleven, Bulgaria, including over 400 works of Bulgarian and foreign art donated by the noted Bulgarian artist and collector Svetlin Rusev.

The exhibition occupies the three-storey historic building of the former public baths built in the 1900s and commissioned to Nikola Lazarov, who combined Neo-Byzantine, Neo-Moorish and Ottoman elements in its design. It served as the city's public baths until 1970, and has been home to the exhibition since 1984, when Rusev donated 322 works of his collection of paintings and sculptures, in 1999 adding 82 more.

The second storey mainly features contemporary Bulgarian painters, such as Nikola Manev, Vesa Vasileva, Encho Pironkov, Georgi Bozhilov, but also the oldest painting in the gallery, a 17th-century work by an unknown French author, as well as a painting by Vienna Secession artist Josef Bauer.